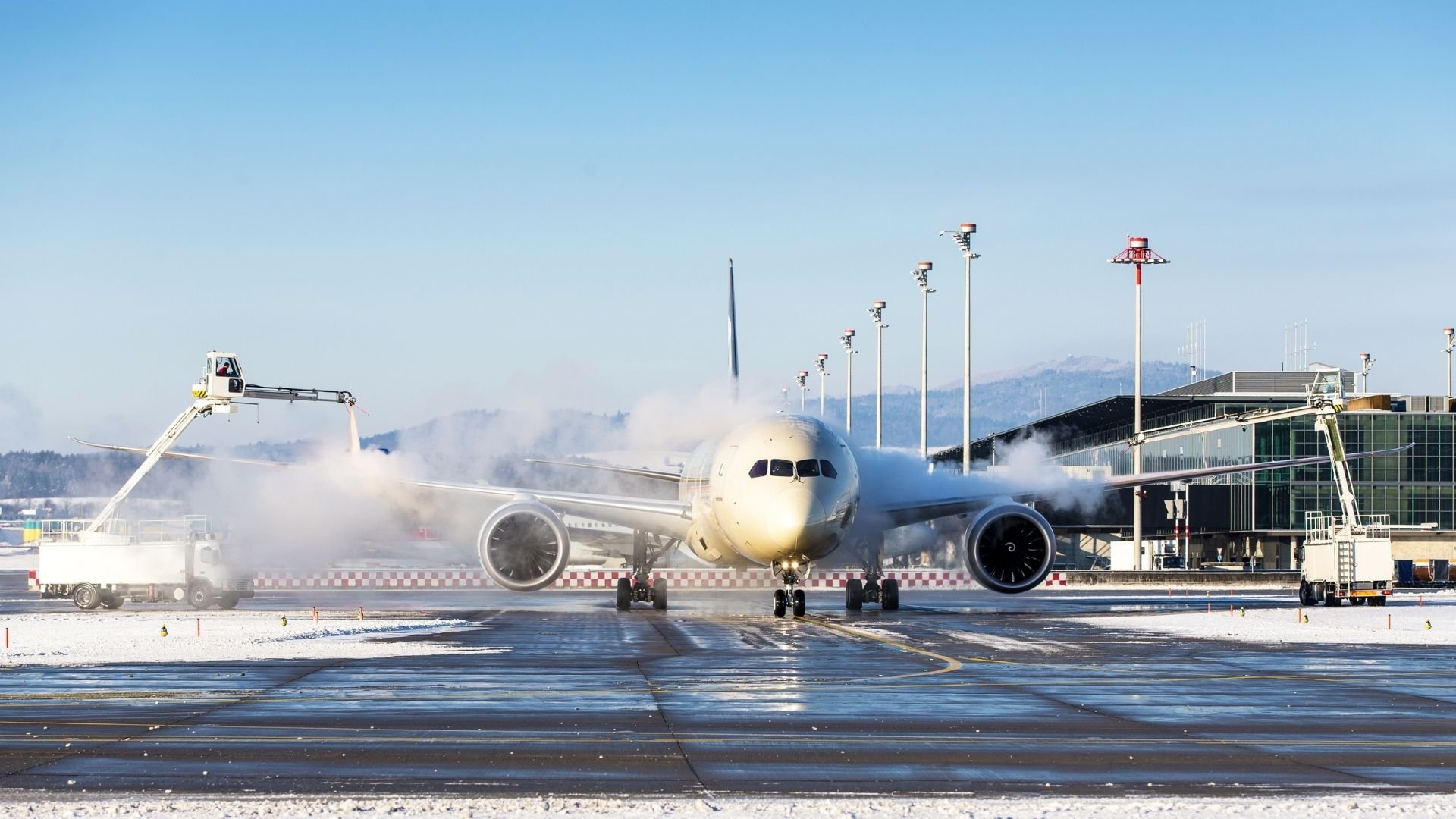 Optimizing deicing operations and improve efficiency in the deicing process

Project Integrating our cloud-based Deicing Manager software to help their operations while allowing for scalability across their whole network.
SOLUTION A complete rollout of Wiseleap Deicing Manager, an Azure cloud-based solution using Microsoft technologies to automate a key process for the customer’s business.
Client

Confidential
A major US airline

The aviation industry has come a long way and modern-day aircrafts are at the pinnacle of technological advancements allowing for large numbers of passengers to travel across the world with all the safety and comfort amenities one can imagine. Nowadays, you can fall asleep in New York and wake up in Tokyo all the while having browsed the internet, eaten a fresh healthy meal, taken a hot shower, and caught up on work and the latest entertainment from 30,000 feet in the air.

But when it comes to Ground handling – which defines the wide array of servicing of an aircraft when it is on the ground, it has not kept pace with the advancements of airplanes. In fact, airlines often rely on antiquated systems, old equipment, and pen & paper records to keep their tight flight schedules operating efficiently.

Partnering with a major US carrier, we worked together to implement our Deicing Manager software into their operations, therefore bringing them efficiency, safety, and optimization to the cold world of winter operations. As the name entails, deicing operations involves the removal of snow and ice built up from an aircraft during the colder months. It is a crucial part in the ground operations services which allows for the safe and secure departure of the aircraft.

“With our Azure-based Wiseleap Deicing Manager product, we aim to bring the same advancements that one expects to see from the aviation industry into the world of airline ground and deicing operations.”

The challenge: how to streamline deicing process?

When you are sitting in an airplane in colder climates and you hear the pilot say that the aircraft will go for deicing prior to departure, you may look out the window and see a few trucks that resemble fire trucks spraying a colourful liquid on the wings and key components of the airplane. The whole process takes 10-15 minutes and before you notice you are taking off to a nice warm destination.

The deicing process might seem simple, however when you look into the details and organization needed for a safe and quick deicing process, there are many moving parts which need to come together to make for a successful plane deicing. To be clear, when a plane is deiced, the crew is spraying a glycol liquid on the fuselage, wings, tail, and all moving components of the plane to remove all ice and snow accumulation. This accumulation can and will severely impact the aerodynamics of the airplane and must be completely removed prior to departure.

Behind the work you see outside of your window is many moving parts such as the training of the crew to identify ice build-up, to be able to maneuver a large vehicle inches away from an aircraft, to know how much fluid to spray, what type of fluid to use based on the exact weather condition, and how much time the aircraft has to depart before the fluid is “contaminated” and the aircraft needs to be re-deiced. And all information related to the deicing event needs to be recorded in detail and held for a certain period in case of regulatory audits… which occur quite often.

Our client had problems tracking which employees were properly trained and had active training records. They also faced issues with knowing which aircraft they deiced. And all these data were recorded using pen & paper, which often ended up being either incorrect, lost, damaged, or entered into a system days later, only to find out that the information was incorrectly entered or the employee working on the flight was not qualified to work in that position. As you can imagine, safety is of the utmost importance in aviation and being able to validate and pull up information in real time is not a nice to have but rather a key factor in providing a safe service.

The solution: a cloud-based software solution

Emyode was approached by the client and began discussing implementing our deicing software named Wiseleap Deicing Manager. Our first goal was to understand the client’s needs and see how our cloud-based software could help their operations while allowing for scalability across their whole network.

We implemented our SaaS product Wiseleap Deicing Manager into their operations and worked closely with the client to tackle all their needs and requirements. Actually, we ended up implementing a solution which imports and validates the employees training records daily to make sure they are properly trained to deice the aircraft. Simply put, if the employees’ training has expired, they cannot access the system.

We also implemented a flight feed to populate the aircrafts departing in the next 2 hours for the user to easily find and select the aircraft they are to deice. And further to this, we integrated a weather feed which provides real time weather information and front-end validation to warn the user if the temperature is getting close to the threshold for the fluid type they are using. And in addition to this, we implemented several validations which block the user from proceeding with the deicing event if a safety or security item has not been met or has been exceeded.

Emyode packaged all this along with single sign on (SSO) into a mobile application with offline capabilities for the end user in the deicing truck to be able to easily work with the application during the operations. Data is synchronized and sent back to the web application where management has real time oversight of operations and can address any issues and complete remotely.

The solution was implemented system-wide for our client in the summer of 2020 in order to be ready for the 2020-2021 winter season. With the Covid-19 pandemic in full swing we initially thought it might be a challenge to implement a solution system-wide for the largest domestic carrier in the US. However the challenges were met with a strong deployment plan and the leveraging of various technologies to deploy and train users on our system remotely. In a typical airline operation it is common for in-person training and audits to occur, but with the halt of non-essential travel during the pandemic, the benefits of our cloud-based solution became even more evident as management was able to view data, conduct audits, and manage the operations remotely as they could log onto the platform from the comfort and safety of their home.

Implementing a customized solution to meet the client's needs

Upon implementing the solution, our customer has seen immediate return on investment. Through the use of Wiseleap Deicing Manager, our client was able to significantly reduce travel costs related to in-person audits and site visits as they were able to visualize the data in real-time through our web portal.

The airports have also seen a significant impact in terms or less time required for manual data entry, a reduction in fines for employees working with expired trainings and most importantly they have been able to flag and address incomplete training through the application as well as use the built-in validations to catch improper deicing and procedures as they occur.

This rollout implementation of our Deicing software to the Customer’s entire operations has resulted in over quadruple the increase in ACR since the initial test runs. Emyode was able to successfully leverage Microsoft technologies and promote growth in the Azure cloud by implementing the solution on such a large scale. Our team was able to successfully leverage new technologies and incorporate the different Microsoft applications into Deicing Manager.

Our solution has now been successfully used by the client for a whole winter season in every airport where they have winter operations. Wiseleap Deicing Manager has proven to be scalable for the client and as they open routes to new destinations, they can easily integrate the system into the new locations. Emyode took Wiseleap “out-of-the-box” solution and personalized it for the client. But more important, this solution can and has been easily adapted to various clients in different locations throughout North America. And we continue to look forward to helping airlines and ground handlers improve their snow and winter operations.

Streamline the capture, storage, and analysis of all the information
you need to manage aircraft deicing operations.

SUBSCRIBE TO OUR NEWSLETTER
We will never share your information to any other organization.
Wiseleap - All rights reserved